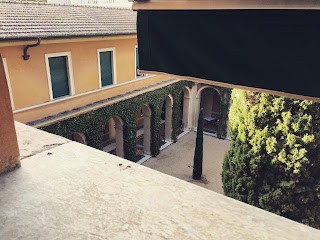 We made it! My wife and I put ourselves through a bit of a grueling travel schedule, but we're here. Other than a bit of jet lag, our experience has been fantastic. Great people, delicious food (shout out to Rome Sustainable Food Project), and gorgeous weather. I can't find the words to describe how amazing our stay has been thus far at the American Academy in Rome.

Moving from one country to another while continuing to homebrew is not exactly the easiest thing in the world. I brought one backpack, one carry on suitcase, and one large suitcase with me. I dedicated about half of the carry on bag to brewing. I packed away some of my smaller instruments and PPE such as my pH meter, refractometer, and brewing gloves knowing the bigger stuff wasn't worth the packing space.

As for the remaining equipment, I had to strategize the best way to continue brewing beer without sacrificing quality. The table below summarizes some of the differences I worked out:

I'm reducing my batch size to limit the amount of ingredients (and money) I need to brew each batch. Obtaining reverse osmosis water in a large city without a car seems a bit overwhelming, so I'm placing my bets on being able to work with the water in Rome. This is the thing I am the most concerned about. I'm buying larger quantities of grain to be shipped to me which means I'll have a bit less flexibility in malt choice. Additionally, I'll be hand milling my grain at home. I'll be trying out the Brew in a Bag technique for the first time to limit the number of hot side vessels I'll need. And finally, I'll be fermenting at ambient temperature. To circumvent the lack of fermentation temperature control, I'll be using mostly Belgian strains.

Five brewing books made their way with me too. Farmhouse Ales, Session Beers, American Sour Beers, Brew Like a Monk, and Wild Brews. After reading this list of books, you probably have some sort of idea of the beers I plan to brew in Rome. My primary focus will be on low-ish alcohol beers of Belgian origin, specifically saisons both of the single and mixed fermentation varieties. As mentioned in an earlier post, I will also be using solely European ingredients in these beers. I'm specifically interested in continuing to explore more of the Noble hop varieties in addition to some of the newer, fruitier German varieties.

For now, I'm anxiously awaiting the arrival of my equipment. Look for brew day posts in the next month or two!
Posted by Taylor at 8:32 AM