Saison for the Dinner Table 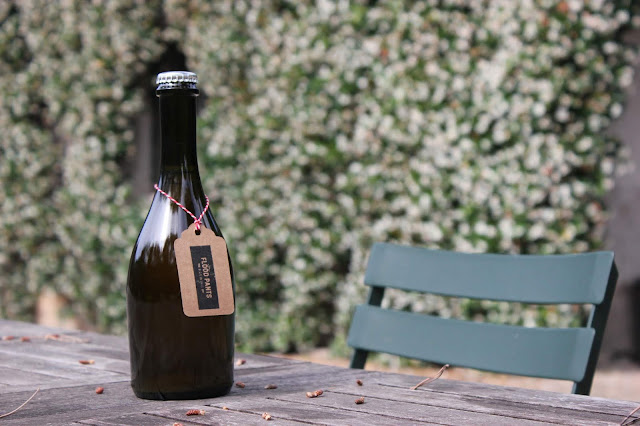 The American Academy in Rome is truly a unique and exciting place. Prominent scholars, architects, and artists from around the United States are brought together for just under one year to share not only the beautiful space but also their ideas. The hope is that this experience will change the way a person thinks about their own work for the better. My wife had the opportunity to embrace this change as a fellow at the Academy this past year in her work on the intersection of ancient Judaism and empire in the Near East. She successfully defended her dissertation this past May and will be continuing her career as an Assistant Professor at UCLA this fall. Following in the footsteps of my wife, I made sure to take advantage of my time at the Academy.

In addition to bringing in talented academic and artistic types, the Academy also has an amazing program known as the Rome Sustainable Food Project (RSFP) that was initiated by one of the founders of the farm-to-table movement. The RSFP's major goal is to provide the community with seasonal, nutritious, and delicious food that is both simple and sustainable. The RSFP has a dedicated cooking staff along with a rotating intern staff that rotates approximately every 3 months. Every year the RSFP hosts a dinner known as the Cortile Dinner during which fellows, trustees, and staff sit down community style to discuss the successes and pitfalls of the year behind them. 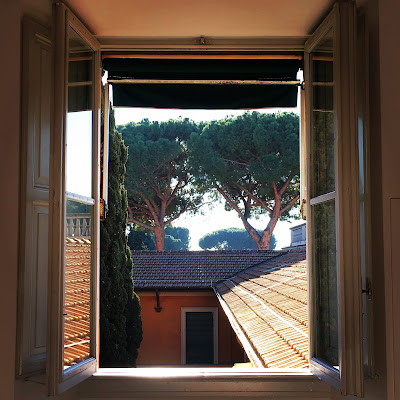 Luckily for me the Head Chef during my stint at the Academy was Chris Behr, a supremely kind and friendly guy from New Jersey who is a self proclaimed meat lover. Similar to me, Chris loves a glass of delicious beer in his hand. In the middle of winter I received an exciting but daunting e-mail from Chris asking me if I would be interested in brewing a beer for the Cortile Dinner. After some quick thoughts on the logistics of brewing enough beer for around one hundred people, I accepted his offer. After accepting, I also realized that not only would I be brewing a lot of beer, but I'd be brewing it for people who may not drink beer or may be directly opposed to it.

The first step I took was to ask for input from the kitchen staff on what they wanted. I was told it needed to be light, refreshing, low in hop character, and pair well with food. I instantly knew that Saison was the right choice for such a beer. Saison beer has the ability to be complex while maintaining that crispy finish that everyone seeks in refreshing beer. Additionally, I've found that people not normally open to trying new styles of beer open up when they drink beer fermented with Belgian yeast. Belgian beer is unique in that it can be fruity, spicy, and earthy without an intense bitterness some may be averse to. 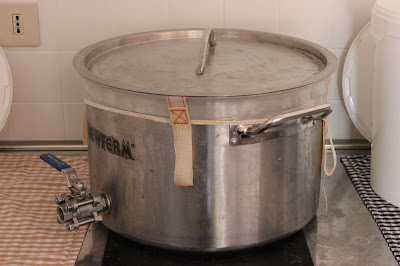 Using the guidance from the kitchen staff and knowing my clientele, I assembled a recipe for the first test batch that I deemed approachable with a characterful Saison "edge." My ultimate goal was a beer that looked like a Belgian Table beer but with a little more flare. I took inspiration from Allagash's Hoppy Table Beer, Central State's Table, and Creature Comfort's Table Beer. I garnered information on ingredients and brewing specifications from each company's website. As was expected, each beer appeared to be low in alcohol (~4 to 5% ABV) to allow for the enjoyment of multiple pints in one sitting. Additionally, I found an emphasis on flavorful, full malt character balanced by an expressive yeast or hop character.

Following my research I decided to hone in on a couple of descriptors: earthy, spicy, and malty. I chose to incorporate both flaked rye and flaked spelt for a malt-forward grainy character. I decided to subtly hop the beer with East Kent Goldings and Styrian Goldings to lend spicy and earthy notes. As for yeast, I chose to split the test batch in half to evaluate two yeasts side by side. I began with yeasts I have the most experience with: White Labs Belgian Saison I (WLP565) and Wyeast Farmhouse Ale (3726). For the first test batch I shot for the lower end of the alcohol content range by aiming for a starting specific gravity of approximately 1.038. The yeast was pitched at ~21℃ and the beers were allowed to ferment at room temperature (~21 to 24℃ ambient). Additionally, they were open fermented during high krausen (around 3 days) to allow the yeast access to oxygen and to minimize CO2 toxicity. The Belgian Saison yeast attenuated as expected to yield a 4.2% ABV beer. The Farmhouse Ale yeast attenuated less than I expected, yielding a modest 3.8% ABV beer. I couldn't help but wonder if my Farmhouse Ale culture was getting a little tired. Following approximately 8 to 10 days in the fermenter, the beers were packaged with priming sugar to 2.7 volumes of CO2. 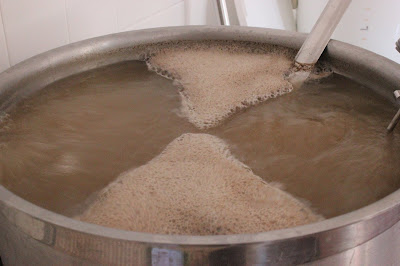 Once the beers were carbonated, they were chilled for a couple of days before being evaluated by myself and the kitchen staff. When judgement day came, Belgian Saison was the victor. Farmhouse Ale was fairly neutral with a very subtle earthiness that gave way to a distinctly one noted malty finish. Belgian Saison stood out. It had a beautiful spice profile and there was a subtle acidity that gave the beer an extra leg up. Following the evaluation, I asked for constructive criticism. The feedback I received from the staff was that the beers needed a little more oomph.

Using this feedback, I decided to increase my starting specific gravity for the second test batch to 1.044. Additionally, I decided to pitch the yeast warmer at 24℃ to encourage the production of esters and phenols for enhanced yeast expression. Following the decided victory of Belgian Saison, I decided to put it to the test by pitting it again The Yeast Bay's Saison Blend. The descriptors from both company's websites indicate they have a "classic" saison character that embody the saison style. In this day and age, that means they should produce results similar to Brasserie Dupont's yeast profile. I followed the same brewing regimen as the first test batch with the noted changes and returned to the kitchen staff for round two. 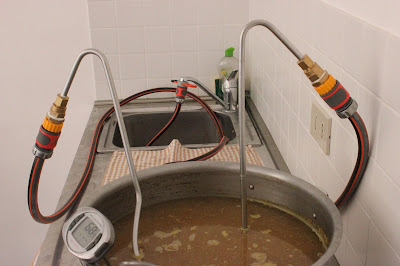 The second evaluation of the beer was a little different than the first. After pouring each beer and testing them side by side, the group couldn't seem to decide on a favorite. Belgian Saison again came in with that classic peppery character and a refreshing tartness. Saison Blend brought a unique earthiness with subtle notes of clove all while leaving enough room for the malt to shine. Following the taste test, the members of the kitchen staff seemed to be split 50/50. Both test batches were thought to be good enough to proceed, but I was told to wait until further notice. Fast forward a couple of days and the decision had been made: the preferred yeast of choice for the Cortile Dinner would be The Yeast Bay Saison Blend. This was not a decision of which strain or blend of strains was "better," but simply a preference for what would work the best given the intended audience.

For the official batch, my goal was to produce approximately 40 L of packaged beer. This quantity would serve around 120 people where two people would split one 0.5 L bottle and the additional volume would allow for some extra "just-in-case" bottles. The kettle I purchased for brewing in Italy was 25 L and it was common to lose around 10 L of water to boil off and 2 to 4 L to trub. Therefore, my finished batch size was typically on the order of 11 to 13 L of wort. Crunching the numbers I decided that each brew day I would need to produce two batches of wort to fill a fermenter with at least 22 L before pitching yeast. Each brew day was successful in producing 22 L of 1.044 specific gravity wort. Fermentations progressed well and according to schedule, similar to the smaller, split test batches. I afforded the larger batches extended time in the fermenter of at least 14 days to allow the yeast plenty of time to clean up any residual off flavors that may have popped up in the larger batches. 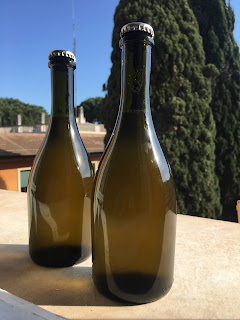 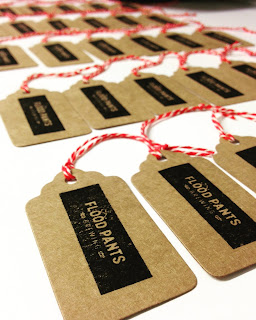 For packaging I recommended my favorite bottle: a Morning style bottle with dark green glass. The presentation of beer in this style of bottle is elegant and it has that "I want to know what's inside that bottle" quality. They are also very functional in that they help to minimize settled yeast from entering your glass, which was a plus given my audience. To adorn the bottle, simple brown tags were stamped with my logo and tied to the bottle with some classy intertwined red and white string. Once all of the bottles had finished carbonating, they were placed upright in the refrigerator for one week prior to serving to allow for natural yeast settling and CO2 integration. 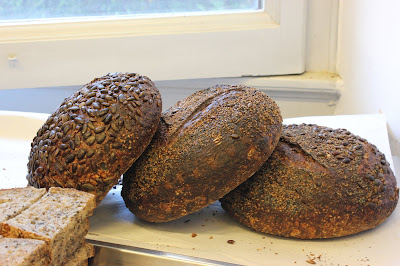 At the advice of the kitchen staff, my beer was to be served with the first course of the five course Cortile Dinner. The first course was a beautiful spiced sourdough bread made by one of the kitchen interns, Daniel Green. Daniel is a master of bread. When he began his stint as an intern, he introduced his homemade sourdough bread to dinners. Once the introduction was made, each and every bread basket was empty by the end of dinner service. For the Cortile Dinner, a small serving of sorghum butter with sea salt was provided with the sourdough bread. They were a match made in heaven. To top it all off, not only could you eat the bread and butter, but you could wash it down with "Tavolo," my Belgian Table Saison. 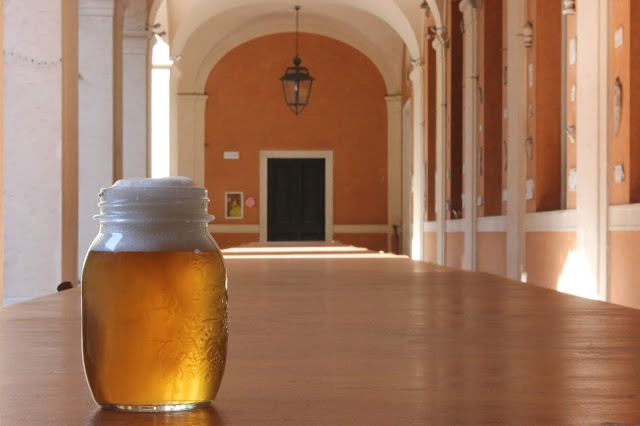 Before I lay out the specifics of the recipe, I have to give my thanks to several people. First to Chris Behr, for coming up with the idea of serving beer at the Cortile Dinner and for standing by this idea, even when there was opposition. Second to all of the hard working full time kitchen staff at the Academy from the sous chef to the dishwashers. This includes Kyle Pierce, Sara Levi, Valentina Montrone, Alessandro Lima, Tiziana Del Grosso, Gabriel Soare, and countless others. Third to Daniel Green, for some fantastic conversations about beer and bread in addition to all of those tasty loaves I destroyed. And finally to my wife Cate for supporting me and my passion without hesitation.

Yeast:
The Yeast Bay Saison Blend built in an unagitated starter with frequent stirring by hand

Oxygenation:
Encouraged splashing from kettle to the fermenter

Packaging:
Packaged in dark green Morning style bottles with corn sugar to 2.8 vols CO2
Refermentation in the bottle upright for 3 weeks at ambient temperature (~21℃)
Chilled in refrigerator for one week prior to serving 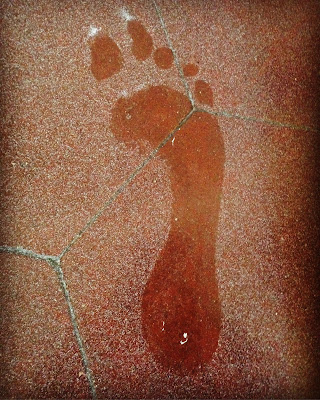